The value of having RN ships deployed across the globe has been vividly demonstrated by the announcement that HMS Daring and HMS Illustrious will be sent to the Philippines for ‘Operation Patwin’ to provide what assistance they can in the wake of the Typhoon Haiyan which struck the Philippines on the 8th of November. One of the most intense tropical storms to ever make landfall anywhere in the world. 300 miles wide, the Typhoon ripped through the South East of the country killing, injuring and thousands of people who now need urgent help. A disaster on this scale will require a global response and the Royal Navy’s contribution, while excellent, will of course only be scratching the surface. However there is a moral imperative that we do whatever we can and the RN presence demonstrates the UK may be far away but still has a global reach that can be used to show compassion to the suffering.

HMS Daring was coming toward the end of a Pacific and Far East tour which included participation in the Royal Australian Navy’s Centenary celebrations and diplomacy visits to various Asian countries. Nowadays it is rare that RN warships are seen in the Far East and it was fortunate Daring was relatively close at the time of the typhoon. She has just completed visit to Singapore and was beginning multi-national naval exercise Bersama Lima when she received orders to sail the approximately 800 miles to the disaster zone. 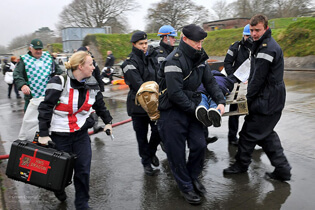 Although the ship cannot carry large amounts of food or repair materials, the crew have a wide range of skills and some specialist capabilities to offer and the Philippine government and its people. Obviously this includes trained engineers and medics well as being able to provide general manpower to do whatever is needed. As a The ship itself carrys 700 ration packs, 550 litres of bottled water and can make 20,000 litres of drinking water every 24 hours. She also has portable generators, fire-fighting equipment, thermal imaging cameras, floodlighting and rescue equipment. However these materials have been supplemented with additional stores embarked in Cebu.

Although Daring deployed with only a single Lynx (she can carry 2 or a larger Merlin), the helicopter will be invaluable and a second flight crew has joined the ship as the helicopter will be worked hard, initially doing aerial surveys to asses damage. Once engaged in relief activities, the Lynx can be used for light transport, lifting and ferrying personnel. Some of the weapon systems and avionics have been removed to save weight and increase carrying capacity. 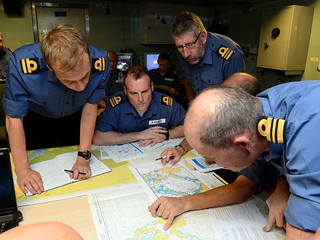 Fortuitously the ship embarked a detachment of Royal Marines in Australia intended mainly for ceremonial duties but they will now prove to be useful extra manpower. There are 3 dental staff aboard in addition to the ships doctor and medically trained personnel. Although the Type 45 is very lean-manned their relatively large size provides useful extra space and proper accommodation for at least 45 extra people besides the standard 190 complement. Personnel flown out from the UK have been embarked including 14 medics and extra flight crew. 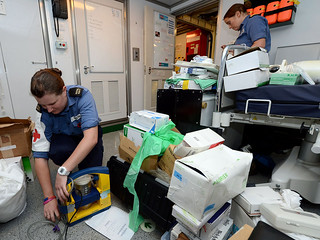 It was fortunate that HMS Illustrious was in Muscat, Oman, making a rare trip into Gulf region and thus much nearer to the Philippines than usual. However the timing is more unfortunate for her ship’s company, coming to the end of a planned 5-month Cougar13 deployment and looking forward to getting back home to Portsmouth in December. She will now almost certainly be away at Christmas which is hard on the crew and even harder on their families, although all concerned are doubtless proud of the ship and the job she will be doing.

HMS Illustrious is an ageing ship and will decommission next year. Although completing a major refit in 2011, she suffered a serious fire in an electrical breaker on August 13th, just days after she had left for the Cougar13 deployment. (Rather reminiscent, although not as serious, as the gearbox fire she suffered 27 years before at the start of the Global ’86 deployment) The excellent training provided by FOST was vindicated once again, the crew reacted well, controlling the fire and managing to avoid using water which would have hugely increased the extent of the damage. 90% fighting efficiency was restored to the ship within hours and she was able to continue with the planned exercises. In the nick of time a replacement breaker and switchboard was saved from the hulk of her sister ship HMS Ark Royal which is currently being ripped to pieces at a scrapyard in Turkey. The replacement has been sent back to the UK and will be fitted when Illustrious returns home. Hopefully this electrical issue and other mechanical problems will not hamper the disaster relief operation. 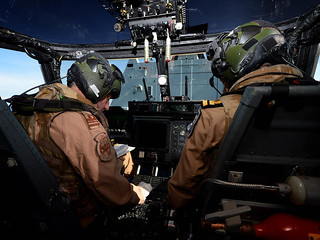 The commitment of Illustrious to the operation will be a major help to the logistical problems of distributing aid and where roads and communications are damaged. Indeed the huge American aircraft carrier USS George Washington is already on the scene and using her 23 helicopters to make a big difference. Illustrious is carrying 7 helicopters – a mix of Merlins and Sea Kings which have much greater lifting capability than Daring’s single Lynx. Illustrious also has more manpower to contribute and would be well suited as a command and control centre. 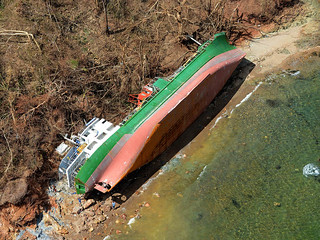 Although able to carry the fraction of material carried by ships, cargo aircraft have the advantage that they can quickly get to the scene but it is already being reported that aid materials are mounting up on airport runways because it is very difficult to distribute it. The Philippines are an archipelago nation, even in normal times are very reliant on transport by sea and not all the islands have airfields suitable for cargo aircraft. With internal roads also blocked or damaged the logical conclusion is that in this case most aid will probably best be delivered directly from the sea. What state the local ports and harbours are in is unknown but in the short-term the initial aid could be delivered by amphibious vessels over the beach.

In some ways it is a shame HMS Bulwark, RFA Mounts Bay or RFA Lyme Bay could not join the operation as their ability to land significant amounts of materials onto beaches using their floodable docks and amphibious landing craft would be extremely useful. RFA Largs Bay was sent to Haiti to help after the earthquake in 2010 and was able to land supplies when the main port facilities were unusable. Sadly this very new, capable and relatively cheap-to-run ship was sold to Australia as part of the ill-advised 2010 Defence cuts. There are limits to what the UK can afford to send and the already vastly over-stretched RN would be left unable to respond to other emergencies and has commitments in the Arabian Gulf. It would appear that the help on offer from HMS Daring and Illustrious will be of greatest benefit to the smaller islands and remote communities that have received no help or contact at all since the disaster. Of course the long-term recovery will be reliant on far greater volumes of food and materials which will mostly have to come by sea but it maybe months or even years before damaged ships, ports and road infrastructure can be restored to the required levels.

As many ‘sea blind’ governments have so often had to re-learn, naval forces provide a very flexible tool for delivery of both hard power and in this case, soft power. The humanitarian aid mission is often forgotten in political discussions around the size and shape of the navy. Maybe more imaginative ways can be found to fund additional warships with contributions from other government departments besides defence. There have also been calls for an “International Rescue Force” ready to respond to large-scale natural disasters that seem to happen on an almost annual basis. Perhaps under UN control and with a mix of military capabilities, participating countries would allocate and declare specific assets available to the force for set periods. The naval component of the International Rescue group could follow the pattern of NATO standing naval groups or the multi-national force working on anti-piracy duties in Indian Ocean & Horn of Africa.

Recent history would suggest the average RN warship is more likely to be involved in a humanitarian operation than firing weapons in anger during its working life. Royal Navy vessels have been involved in disaster relief work going back decades, the number of operations too numerous to cover in detail. Some more recent example include HMS Southampton helping evacuate the population of Monseratt when the volcano erupted in 1995. HMS Chatham assisted coastal communities of Sri Lanka after the devastating Tsunami of December 2004 and this was captured in the BBC documentary ‘Shipmates’. An extremely moving moment in that documentary was when a group of nuns who ran an orphanage which had been devastated by the Tsunami describe how they were desperately praying for help when a Royal Navy warship appeared on the horizon. HMS Manchester was on hand to provide aid when St Lucia was hit by a hurricane in 2010 also recorded in a BBC documentary ‘Royal Navy Caribbean Patrol’.

Ultimately this is a story of human suffering on an overwhelming scale and our thoughts are with the people of the Philippines and we wish the RN personnel all the best in their work.